Economic activities are the engine of our society. A well-functioning economy provides work and related activities, and thus creates income and prosperity for its inhabitants. In this article, we will discuss the economic activity Ghent-Bruges and different industries around the Ghent and Bruges area.

Ghent’s function as an economic centre goes hand in hand with a high demand for space for economic activities.

The port of Ghent cannot be missed in this story. The port area counts five docks: Kluizendok, Rodenhuizedok, Mercatordok, Sifferdok and Grootdok. The Kluizendok and the surrounding industrial sites together have 660 hectares of industrial sites. This makes Ghent one of the largest maritime business sites in Europe!

The port has the necessary equipment for seagoing and inland navigation as the Ghent Port Company maintains and invests in the ports’ infrastructure.

The Port of Ghent is the third busiest seaport in Belgium, located in Ghent, East Flanders in the Flemish Region. In recent years, the port provided more or less 96750 jobs. In addition, Ghent also works with industrial companies in biotech, energy, food….

Antwerp and Ghent together account for almost one-sixth of all jobs in the Flemish Region. Without a doubt, the port of Ghent plays a major role here as it is part of the North Sea Port. North Sea Port is a 60-kilometre-long cross-border port area that stretches from Vlissingen on the North Sea coast in the Netherlands, some 32 kilometres inland to Ghent in Belgium.

North Sea Port is a central hub in Europe, it is a multimodality port and transports a wide variety of types of goods. This port has a true impact on global trade and there is still space for development in the port area!

Bruges is a very attractive city for entrepreneurs. It has experienced strong economic growth in recent years and has evolved into a strong economic pole of attraction. There are some clear factors that play a role in this:

A unique geographical and strategic location

Bruges is centrally located and easily accessible. It is located between France, the Netherlands, Great Britain and Germany. An hour away from Brussels, the capital of Europe, and close to other Belgian cities. It also has a pleasant environment. Nowhere else in such a small area will you find such diversity: culture, polders and sea. The many facilities make the region not only the ideal location to live, it also offers an excellent setting to receive business contacts.

Logistics: the region is very accessible and easy to reach

There is always room to do business in Bruges. The business climate is therefore very favourable. Entrepreneurs do not get lost in this region and networking is very efficient. Entrepreneurs find it much easier to step outside their sector than in the big cities. An example of an annual networking event is B2BnB (Business to Business in Bruges), an organisation of five Bruges associations.

In addition, there are a series of suitable business premises and sites and an office market with a wide range. Bruges pursues a careful and sustainable policy regarding business sites and premises. Legislation guarantees the quality of the land and the Flanders Spatial Structure Plan integrates it into the surrounding area in an appropriate manner.

Besides all these advantages of Bruges itself, we should not forget the importance of the port of Zeebrugge. Thanks to the modern infrastructure which is designed for the optimal handling of the newest and largest ro-ro and container vessels, and the excellent road and rail connections, the port has become a multipurpose transport centre!

The port of Zeebrugge has gradually developed since 1985 into a medium-sized port in the Hamburg-Le Havre range. It has been developed into a deep-water port.

In 2020, the cargo throughput in the port of Zeebrugge was 47 million tons. About three quarters of it were unit loads which were shipped by container ships.

For the future, the focus of this port lies on attracting additional container traffic and distribution sites. A new sea lock (SHIP) and the optimization of the maritime access and the hinterland connections are also important points, high on the agenda.

Like any other port, the port of Zeebrugge undoubtedly offers enormous employment opportunities for the city and the surrounding area.

As you can read, the region Ghent-Bruges offers an abundance of economic activities. This makes the region popular with large companies and expats. Due to its popularity, it can sometimes be difficult to find temporary housing. If you need assistance, please contact Globexs for guidance. We have a large portfolio of furnished rentals in Ghent. We can help you relocate from start to finish. (info@globexs.com)

If you need a Global Digital Nomad insurance, make sure to check out SafetyWing.  Booking through this link will get you a 5% discount. 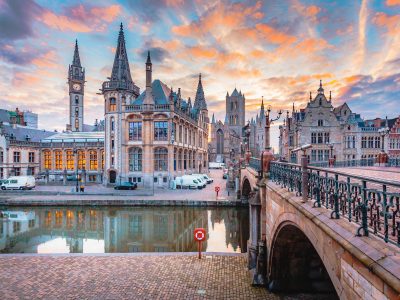