7 things I wish I knew before moving to Valencia

Things you should know before moving to Valencia

If you are thinking of moving to Valencia, you want to read this article. Valencia has advantages but also disadvantages. Before moving, you want to know these 7 things.

Well, this point goes on top of our list: The language. Valencia is not Benidorm where you can order your lunch (or full English breakfast) in basically any language, especially English. In Valencia, people speak Spanish (Castellano) and Valencian. No need to invest hours in learning Valencian, but you need to know at least the basics of Spanish before moving to Valencia.

Learning Spanish is not only a sign of respect to your new neighbours, but it is also a necessity to make your expat experience enriching and successful. You can have first-class degrees and a clutch of employment testimonials but if you don’t speak Spanish no Valencian company will hire you. And if you don’t speak Spanish you will find it very difficult to make Valencian friends. And believe me, you do not want to be surrounded by expats only.

Learning Spanish might seem like an Everest to you, but it can be done quickly if you have the time, the right mindset, and the money. Several language schools offer crash courses that will almost guarantee you basic language skills in 6-8 weeks. These programs don’t come cheap (expect to pay 1500-2000€) but are highly efficient.

It is very difficult to recommend language schools for several reasons. First of all, because they come and go. They pop up and disappear. And secondly, many schools are focusing on a specific crowd: students, companies, retirees and so on, so have their own teaching method that might either suit you perfectly or confuse you. The larger and more reputed schools out there are ILE Spanish School, AIP and Route66.

When moving to Valencia, it takes a year to adjust. The first three months are the honeymoon months. After six months, you’ll start getting the feeling that you “actually did it”, and after a year you probably feel like a “confirmed expat in Valencia”.

Nevertheless, the first year you live in Valencia feels like a holiday. And this feeling never really goes away until your Spanish is fluent enough to fully understand the Levante and Las Provincias regional newspapers, and even more importantly, the noticias on television. And to be honest, this is not a moment to really look forward to.

When you understand the language you will realize that Spanish politicians are no better than British, Belgian or Dutch ones, and they get themselves stuck in the same pack of lies and empty slogans. On the positive side, your suspicion that the Spanish are warm and genuine will be reconfirmed. Without a shadow of doubt, the Spanish are among the kindest people in Europe.

So expect your expat experience in Valencia to start from the moment your Spanish has reached a decent level. That is when it will truly begin to feel like an enriching experience.

Winters in Valencia are much colder than you would expect. They are short, but you will suffer in December, January and February. Temperatures never drop below six degrees celsius at night, and during the day temperatures can rise up to 17-18 degrees even in the coldest months. But on a cloudy and windy day you will suffer, both inside your house and on the streets, because the humidity will get to your bones.

Most traditional apartments in Valencia are not equipped with central heating and in the coldest months you need to rely on estufas (electrical heaters) or on your split AC (hot/cold). But these electrical heating devices will never give you the comfort that you are used to back home.

I was born and raised in Belgium and I spent Christmas in my parents’ home in short sleeves. Unthinkable in Valencia. In December, January and February temperatures are uncomfortably low in your apartment, in the cafeterias, in the shops and in the streets. In other words, you never take your jacket off.

In winter, you will feel cold more often in Valencia than in your home country, and the opposite is true in summer. While winter lasts for three months only, summer lasts for nine months. Every public place, restaurant, bar, shop, and most apartments are equipped with AC. It never gets really, really hot in Valencia, though some suffer with the sticky heat of summer. In June, July and August the temperatures rarely rise higher than 32-33 degrees, and you will find it easy to protect yourself from the heat. In Belgium, however, I remember that the occasional heat wave drove people absolutely mad.

A typical mistake that expats make when they arrive in Valencia is choosing too big an apartment. Because Mum and Dad might come over, and your sister-in-law, and all those friends that you have not seen in years… Indeed, when you move to Valencia all of the sudden you are anxious to host a lot of people. You want your friends and family to choose Valencia for their next holiday or city trip, because you are proud of your move, and want to share your enthusiasm with anyone with enough patience to listen to you.

But the glamour fades away quickly. After their first visit your friends and family will stop showing interest in Valencia and pick Lisbon for their next city trip, and you will end up with way too big an apartment. Oh my goodness! After all that time you spent decorating the three guestrooms!

Picking the right apartment is one of the most difficult challenges you will face in the preparation phase of moving to Valencia. Even if you are certain about the neighborhood you want to live in, you can still pick the wrong apartment. There might be moisture in the bathroom, the neighbors may be noisy, the elevator is too tiny to fit the bike, or even your shopping and so on.

Our advice is to choose a furnished expat rental for the first months, and to take your time to find a long-term rental. And above all, do not pick a too-big apartment. One of the reasons for your move to Spain is, without any doubt, to simplify your life. Focus on the outdoor space for the sunshine-breakfast you always dreamt about, instead of on the extra bedroom to satisfy your mother-in-law when she finally decides to visit you.

When moving to Valencia it is wise to use a relocation company to make the move easier. You will find the prices very reasonable, and you will save yourself a lot of frustration if you get professional help with the boring part of your relocation. The simplest tasks such as opening a bank account can become a nightmare if you are not assisted by a relocation professional.

Opening a bank account is just the first step. Other administrative challenges are waiting for you: empadronamiento, centro de salud, NIE certificate, residencia etc… Oh yes, your public administration nightmare has only just begun. Even if you speak Spanish you will eventually find yourself in a horror story sooner or later. Don’t expect the officials to be helpful at all. They are underpaid and understaffed. Get professional help to help you through the paperwork; you will not regret it.

Networking? Sure, but how?

As soon as you meet people, locals and expats, your expat experience will become extremely rich. Although some people experience the Valencians as hospitable, others interpret Valencia as a closed society.

Indeed, it is not easy to establish long-lasting friendships with Valencian people, unless of course you get shot by Cupid’s arrow. Having a Spanish romance is the fastest way to integrate. If that is your case, you better get used to Abuela’s paella every Sunday as the highlight of the week. Not ready for a steady relationship? Join a local football team or the gym around the corner.

The easiest first step to integration is to meet other expats in Valencia, people from your own culture. You know, other immigrants who like to call themselves expats. Valencia has large communities of foreign citizens. Join Facebook groups such as Valencia Information Exchange or Expats Living and Working in Valencia, and you will find it easy to connect with other foreigners. But be aware of other expats, especially compatriots. The mere fact that you were born in the same country can give a false sense of security and trust.

Prepare yourself for spending quite some time alone in the beginning, but if you have the right mindset, you will have a wide circle of new friends soon enough.

You will never want to leave

Once you taste life in Valencia, you will never want to leave. That is a fact! Moving to Valencia is lifechanging!

Make the move easier by moving your own things with you. 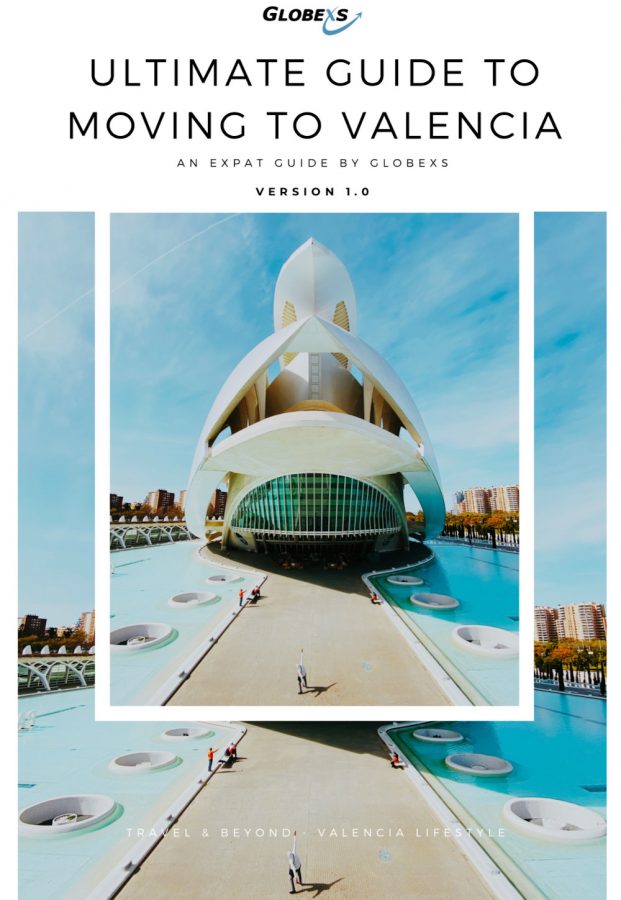 We will guide you through the local administration of Valencia. You will learn how to obtain a NIE, empadronamiento and residencia. Furthermore, we also give you insight into what you should do if you want to invest in Valencia or Spain in general. Or do you need help with declaring your VAT? This will also be covered. We will guide you from start to finish!

In the last chapter, we indicate some things that you usually don’t know or expect before moving but which can be interesting to know! On top of all this, some of the expats themselves will also have their say. They share their experiences and stories in the form of case studies.

All you have to do to get this e-book is send an email to sandra@globexs.com. You will receive the e-book by WeTransfer. This guide will be updated by any (legal) changes. Subscribe to our newsletter to stay up to date

TOTALLY FREE - 62 pages of useful information and case studies about moving to Valencia.

Read more
PrevPreviousPros and cons of investing in Valencia
NextGlobexs rentals for digital nomads – Negocios TvNext
We use cookies to ensure that we give you the best experience on our website. If you continue to use this site we will assume that you are happy with it.OkPrivacy policy